Guidance for composing with beginner instrumentalists

Most of these Resources were created and developed as part of BCMG’s Imagine Compose project. Imagine Compose was a partnership project with Birmingham Music Service funded by Youth Music that aimed to encourage and nurture beginner instrumentalists to compose and improvise from the beginning of their musical lives. The two year project was led by composer Liz Johnson and consisted of: workshops with children; professional development sessions for teachers and emerging professional composers; commissioning new pieces for beginner ensemble; and, the development of online composing activities for young people. BCMG worked with four ensembles: Handsworth Area Ensemble; Gilbertstone Area Orchestra in South Yardley; Anderton Park Ensemble in Balsall Heath; and Harborne Area String Ensemble.

The project was evaluated by Professor Martin Fautley, Kirsty Devaney and Dr. Victoria Kinsella of Birmingham City University.  The Executive Summary can be found HERE in the Reports section of the website.

A Very Short History of Composing with Children

Composing can be a scary word conjuring up images of dead white men in ivory towers with reams of manuscript paper. It is often seen as an elitist activity that only ‘specially gifted’ people can do. The Imagine Compose Resources hold that musical creativity is something within all of us.

Composing has been part of the UK National Curriculum since 1987. However, there have been notable initiatives/projects before this exploring composing with children in the UK since the 1940s starting with Carl Orff's Schulwerk and including: Peter Maxwell Davies's innovations at Cirencester Grammar School in the late 50s early 60s; the John Paynter led Schools Council Project Music in the Secondary School Curriculum; Jeanne Bamberger’s research into children’s invented notations in the 70s; and, the work of the Canadian composer and educator Murray Schafer. Other important figures include Ian Lawrence, Brian Denis, David Bedford, Bernard Rands, George Self and Gillian Moore in her role as Education Officer of the London Sinfonietta, the first such post in the UK.

The following book list about composing with children at the end of this guidance. We would strongly recommend reading some of these books.

The diagram on the following page is a simplified representation of the composing process. It suggests that the composing process is a linear one but the reality is much more complex and messy. Encourage children to think of composing more as a process of a collage that is being assembled rather than one where they start at the beginning and work through until the end. Frequently, children, and the adults that work with them, get stuck on the generating stage of the process. It is important to support the children to be confident with the music material they have and close down generating new stuff. Support them to find many potential ways of developing individual ideas – more than they might need in their piece. Show them how much musical possibility there is in a simple idea and how that can create coherence in a piece of music rather than sequencing lots of different unrelated ideas – unless, of course, that is exactly what their intention is. Important too is giving time to think about structuring ideas. Again children are very good at generating ideas but find it harder and/or are given less opportunity to organise their musical material into larger musical structures.

It is helpful to model this process for the children and make your choices and thinking clear. Try out different ways of organising the same musical material as suggested by the children. Give the children time for listening to and refining their music . Don’t always accept the children's first offering. Challenge them to make it better.

As with professional composers, some children respond better to being given tight parameters for composing where as others thrive by being given a very open brief. It is important to offer both these possibilities to the groups you work with. Each Resource tries to offer both of these. It is easy to think in binaries of tight parameters being restrictive and open ones creative. This is not necessarily the case. With very open briefs the possibilities are endless and children can get lost. Tight parameters can offer the opportunity to be very creative within a small space. Tight parameters can also be a good way of teaching a particular composing skill or introducing a particular composing device. 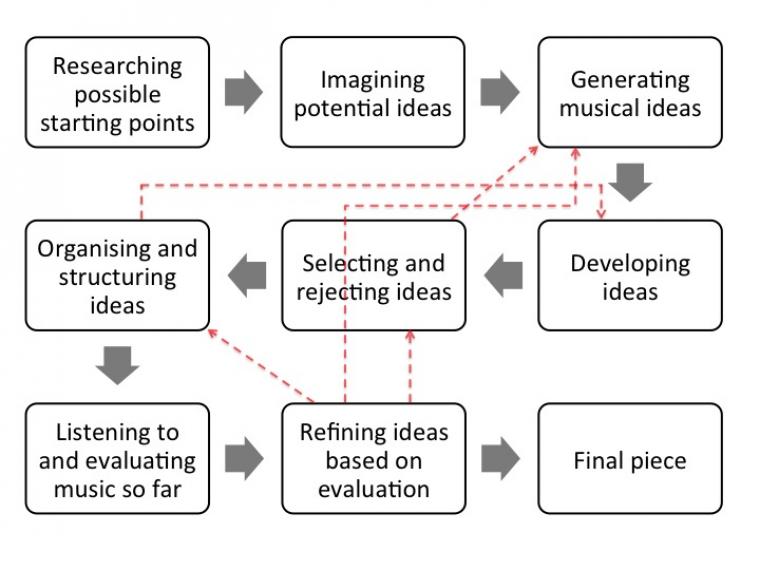 It is easy to think of composing of a series of techniques to be mastered - the ‘doing’ of composing. In Imagine Compose and other BCMG composing projects we have explored what it is to think like a composer and encouraged children to identify themselves as composers just as they might think of themselves as trumpeters or violinists. Below is a list of characteristics of composers that we are developing:

Identifying as a composer:

These ideas are designed to support the adults leading the activities to reflect on the young people’s composing and their progress as composers.

Much of the activity in these resources requires the children to work in groups. Careful thought has been given to the group sizes and their make up throughout the resources but this will vary from context to context and by how well you know the children you are working with.

Choices about group size are influenced by:

The make up of groups is influenced by:

Listening, Giving Feedback and Other Pedagogies

It is important to realise that just listening and giving your full attention to music young people create can be powerful.

Don’t forget you are a composer too. Model composing to the children making clear your thought processes and the thinking behind your choices.

Within any group of young people there will be a wide range of abilities and experience. Simplifying and extending activities needs to be part of planning. Simplifying might be done by giving the child fewer pitches to work with; learning part of a rhythm rather than all of it; creating a shorter melody/rhythm. With a child that needs stretching you might: ask for more variations of an idea; ask them to notate the idea; or, ask them to create a contrasting section.

Give the children thinking time without instruments at the start of composing and during the process.

An important part of the pedagogy of composing is asking questions. Simple guidelines would be to:

Below is a set of useful question stems adapted and edited from Fautley, M and Savage, J. (2014), Lesson Planning for Effective Learning (Abingdon: Open University Press) that can be used to support children's composing.