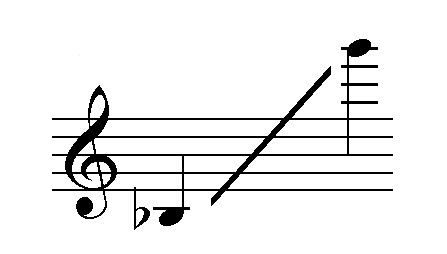 Extended techniques on the oboe and how to notate them 1

The suggested extended technique notations below are only suggestions. Please feel free to invent your own or just write in the part what you would like the musician to do. All the note heads we have used can be found in the Sibelius software.

The musician uses the throat or tongue to create a fast vibrating sound like a buzz or ‘flutter’.

The musician plays intervals smaller than a semitone such as quarter tones (4 divisions of a tone) and even smaller by using different fingerings or embouchure (mouth).

This is simply the the noise of the keys. On the oboe these are unpitched. Only to be used sparingly in quiet passages.

A bending of pitch between between two notes either up or down. For the oboe, a glissando is only possible for intervals up to a third.

Extended techniques on the oboe and how to notate them 2

This is movement within a pitch that enlivens it and is used to create expression. It can be very wide and obvious or very small and gentle.

Blowing down the instrument

The musician blows down the oboe without the reed to make an airy/windy sound.

Give a verbal or written instruction

The musician alternates playing the same note with two different fingerings. This produces a fluttering effect on the same note through changes of tone colour and slight pitch changes.

The musician uses just the reed. The range of pitches that can be played depends on the player and will be approximate.

To listen to the following tracks you need to have Spotify open on your computer.